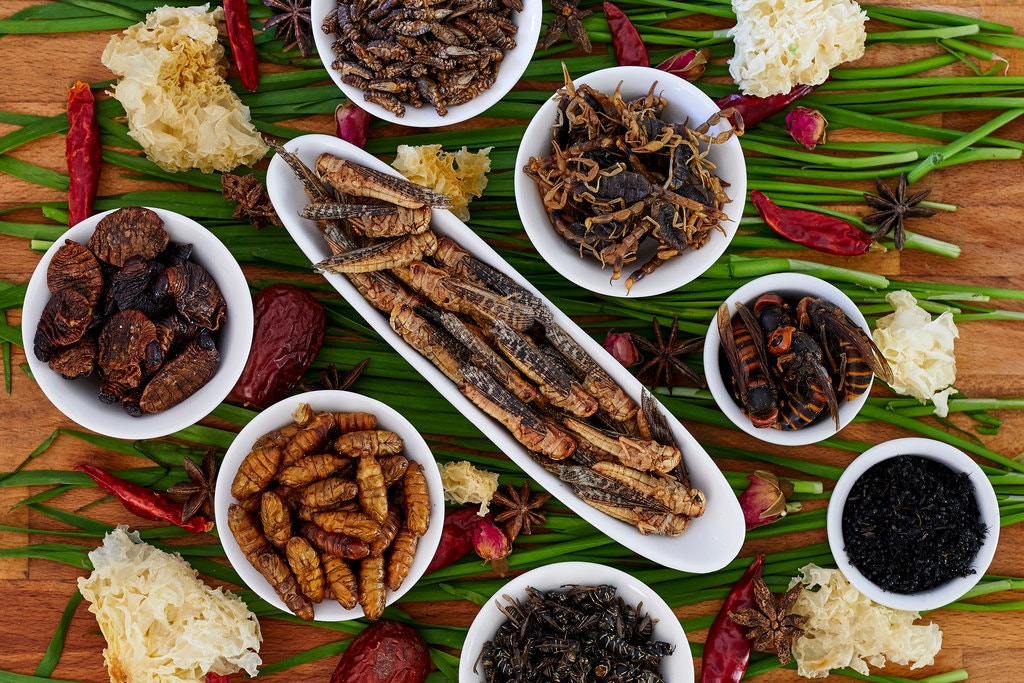 Did you know that cricket flour — also known as cricket protein powder — has almost triple the amount of protein present in sirloin and double the protein of chicken? That’s right, cricket flour!

You may be tempted to dismiss this outstanding protein food right away, but cricket flour actually has a mild and nutty taste that many people seem to enjoy. There are actually thousands of insects that are eaten worldwide, but crickets continue to gain momentum because they are easy to farm and come with a host of nutritional benefits. Are crickets forging a path for insect-eating acceptability in the Western world? It certainly seems like we are headed there.

Cricket flour is made by drying or roasted crickets that are raised on domestic cricket farms. They are then milled into a fine flour that can be used in protein bars, smoothies and baked goods. According to Consumer Reports, cricket protein products were a huge hit at the National Products Expo in Baltimore. Manufacturers are using the product’s protein and nutrient punch as their marketing strategies — promoting cricket flour as a healthier and more sustainable means of protein than beef.

Consumers Reports actually taste-tested six different cricket flour protein bars made by two manufacturers. The food experts agreed that you wouldn’t know you were eating crickets. Many cricket protein bars contain other natural flavors, such as almonds, peanuts, blueberries, dates, vanilla, cacao, dark chocolate, coconut and ginger. These are healthy ingredients when compared to many popular protein bars that contain lots of added sugars, oils and even soy protein isolates.

Over the past 3–4 years, more than 25 edible insects startups have launches in the United States and Canada. One new company, called All Things Bugs, sold 10,000 pounds of cricket powder in 2014, according to Fortune. It has been estimated that the edible-insect industry will be worth more than 360 million dollars in the next five years — so it looks like cricket protein powder is here to stay.

A serving of cricket powder is two tablespoons (12 grams) and contains about:

The History of Entomophagy

The word entomophagy in Greek is broken down into entomos, meaning insect, and Phagein, meaning to eat. Insects have served as a food source for tens of thousands or years, all over the planet. In the Middle East, as far back as the 8th century B.C., servants carried locusts arranged on sticks to royal banquets. In Greece, eating cicadas was considered a delicacy.

In the 21st century, two billion people already ate a wide variety of insects regularly, and in 2013, the United Nations Food and Agriculture Organization (FAO) reminded citizens that there are more than 1,900 edible insect specieson Earth that are packed with protein, fiber, healthy fats, and essential vitamins and minerals.

According to the FAO, the acceptance of rejection of entomophagy is a question of culture. Native Americans were very accustomed to eating grasshoppers, locusts and crickets. Today, insects are considered delicacies in many parts of world, particularly in the tropics where a variety of edible insect species can be found year-round.

As the domestication of animals and plants took place thousands of years ago, eating insects became less popular in the U.S., and now insect harvesting is associated with the primitive, hunger-gatherer era.

A 2014 study published in Ecology of Food and Nutrition found that providing information and entomophagy and offering an opportunity to try insect food positively influences people’s attitude toward eating insects.

Although athletes and bodybuilders need adequate carbohydrate consumption in order to enhance their performance, satiety and fat loss generally improve with lower carbohydrate diets, specifically with higher protein to carbohydrate ratios. Being that cricket flour is high in protein and low in carbohydrates, it is a great tool for bodybuilders or athletes who are looking to boost their strength and performance.

If you are looking to burn body fat quickly, you need to consume a substantial amount of protein. You will want to replace extra carbohydrates in your diet with more protein. For every pound of body weight, shoot for eating 0.75 grams of protein. For example, if you weigh 160 pounds, multiply 160 by 0.75 — that means you should be consuming about 100 grams of protein a day to burn fat.

Cricket flour is a great way to do this without consuming extra carbs because it is packed with protein and contains only 0.8 grams of carbohydrates per serving.

Another benefit of cricket protein powder is that it’s a gluten free flour. Most people today use white flour or wheat flour, but neither one is good for your health. Most white and wheat flours are bleached, contain gluten and are hard on the digestive system.

For some people, it’s important to go gluten free because gluten can be very hard to digest. One out of every 133 people have Celiac disease, which means that they can’t digest gluten at all, and 1 out of every 7 are severely gluten intolerant, so eating gluten products can lead to a serious reaction.

Generally, people who go gluten free notice that losing weight is easier, it improves their digestion, it helps the thyroid function at a higher level, and it boosts energy levels.

Just one serving of cricket flour contains about 17 percent of your daily value of vitamin B12. Vitamin B12 is thought to be one of the leading nutrient deficiencies in the world, with a 2004 study showing that it’s a major health concern in many parts of world, especially is persons of European and African descent.

Getting enough vitamin B12 every day helps to main energy levels, prevents memory loss, helps the nervous system to function properly, plays a role in maintaining heart health, and promotes healthy skin and hair. These vitamin B12 benefits are easy to obtain with the consumption of cricket flour and cricket protein products.

Cricket flour is a complete protein, so it contains essential branched-chain amino acids that the body needs for muscle development. Proteins are considered long chains of amino acids, which are the important molecules that we get from our diet.

Cricket protein vs. Beef and Other Protein Sources

It is estimated that crickets are 20 times more efficient as a source of protein than cattle. Crickets require about six times less feeding than cattle, four times less than sheep and two times less than pigs to produce the same amount of protein. Crickets also require far less water than cattle; in fact, to get a pound of dry protein from a cow, between 1,700 and 2,500 gallons of water is required. To get the same amount of protein from a cricket, only one gallon of water is needed — that’s a tremendous difference.

Growing insects requires little infrastructure or resources, too. To live and grow happily, crickets need a home that is between 80–90 degrees Fahrenheit with 90 percent humidity. They also like cardboard or egg cartons to climb on. Many reputable big cricket farms feed their crickets a grain-based diet and filtered water. Chicken and cattle, on the other hand, require costly amenities including special fencing (while crickets only need fiberglass troughs).

Crickets also produce 80 times less methane than cattle. Methane is the primary component of natural gas, a common source of fuel. When methane leaks into the air, it absorbs the sun’s heat and warms the atmosphere. This is why it’s considered a greenhouse gas, like carbon dioxide.  According to a scientific review conducted at the Department of Animal Science at Washington State University, cattle can produce 250–500 liters of methane per day. The level of feed intake is one major factor in the influence of methane emissions from cattle.

Domestic livestock produce large amounts of methane as part of their normal digestive process. It is also produced with animal manure is stored in holding tanks. According to the United States Environmental Protection Agency, the agricultural sector is the primary source of methane emissions globally.

It’s not safe to use any old cricket that you find in your backyard to make cricket flour. This is because crickets may be infected with pesticides, which can be poisonous to humans. It is important to purchase cricket flour from a reputable source to be sure that they are free of dangerous chemicals.

Start with a small amount of cricket protein and work your way up. Your body needs time to get used to this new source of protein and you want to make sure that you don’t experience any allergic reactions.

Cricket flour is emerging as a new source of protein for athletes and people who are looking for a more sustainable option. It is easy to incorporate cricket flour into your everyday diet. Here are some quick tips:

Cricket flour helps to build muscle and lose or maintain weight. It is a good source of vitamins and minerals, including vitamin B12, vitamin B2, iron and calcium. It may be worth giving this sustainable and healthy source of protein a try soon.